PLAYMOBIL® is known for its realistic and detailed, yet adorable figures that make role plays more relatable with real-life situations and fun!

The signature PLAYMOBIL® toy is a 7.5cm tall human figure with a smiling face.

For its creators, it all started with the idea of making a toy that would give children a true play system – not just once but again, and again. Children can combine different parts and themes, creating new scenarios and characters each time.

PLAYMOBIL® is not so much about putting pieces together, but rather “TELLING THE STORY”.

How PLAYMOBIL® Came About? 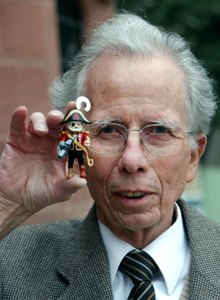 The aim was to develop a toy that was not too complex yet flexible enough for it to not inhibit children's imagination. Beck wanted the toy to easily fit into a child's hand, and based the facial design on children's drawings: a large head with a big smile and no nose. When he passed the little figures to children, he saw that they accepted them readily and invented little scenarios for them. "They never grew tired of playing with them", Beck remarked. That is when and where PLAYMOBIL® started.

It is about endless story-telling possibilities where children can reenact everything they experience for hours on end. The only rules are the ones they create: a world where jumping from a pirate ship to a space station could be the most natural thing.

What is ToppingsKids' role in PLAYMOBIL®

PLAYMOBIL® has been in Singapore for many years now, however, its presence in our SG online community may be something new. Therefore, we are honoured and excited to be the exclusive online retailer of PLAYMOBIL® in Singapore, which will introduce every detail of each pack, demonstrate and recommend how to play for each age group.

With a long and reputable history, PLAYMOBIL® is internationally loved and has sold 3 billion figures worldwide in more than 100 countries. A strong family brand that crosses all ages, genders, and generations.

Pretend play is essential for children to learn about themselves and the world. At ToppingsKids, we strongly believe in learning through play and sharing products that aid in children's holistic development. With the intricately designed pieces, even minute details from our everyday lives are brought into your little ones' play. Enhancing the quality of pretend play.

Carefully curating pieces that our SG kiddos will love, we want to share the developmental benefits that PLAYMOBIL® brings! From enhancing socio-emotional skills and language development to understanding the world better through role-plays of actual scenarios in the little PLAYMOBIL® world. How is PLAYMOBIL® Important for Development?

PLAYMOBIL® understands the importance of a holistic development, therefore, it focuses on role-playing that touches on various developments that are crucial for children. The 4 main benefits are social, cognitive, emotional and motor skills development. Not only so, it creates a safe space for children to act out scenarios present in their everyday lives, but from a third-party perspective. For example, ordering food at a restaurant, talking to a doctor during a consultation, and calling for help when there are emergencies.

Role-playing also enhances language development through the opportunities to practise different conversations in different scenarios, allowing children to learn and practise vocabulary specific to the situations!

It gives parents a fun way to teach positive behaviour to their children too! Parents can create “incidental learning” opportunities thrrough situations that are created during play. For example, a situation where the PLAYMOBIL® children needed to share a toy. "They both want the same toy, what can they do?" From there, guide your child through critical functional skills and the ability to work through tricky situations!

Only Quality Pieces, Made in Europe

Made with the intention of durability, to pass down from generation to generation.

PLAYMOBIL® lives up to very strict quality and safety standards, making it a well-trusted brand. All parts are produced in company-owned manufacturing sites based in Europe and tested by recognised independent testing institutes, exceeding legally-defined requirements by far. Its headquarter is located in Zirndorf, Germany, from where the journey all over the world begins.

In line with ToppingsKids, we believe in quality products for our children, instead of products made with inferior materials. As the products will be used by our little ones, we do not want any potential risk or harm, and only the best for them.

PLAYMOBIL® is made with safe and non-toxic ABS (acrylonitrile butadiene styrene) plastic. ABS is very shock-resistant and high quality, often used in household appliances and motorcycle helmets too. What is the Difference with Lego?

PLAYMOBIL® is all about story-telling.

PLAYMOBIL® toys can take off into the world of adventures right out of the box. On the other hand for Lego, the world has to be constructed first. In essence, PLAYMOBIL® focuses on role-playing or imaginative play, while Lego is a toy for builders. Due to this, PLAYMOBIL® is usually well-loved by the younger children, while Lego is popular with the 'bigger' children who want customisations. The figures of PLAYMOBIL® are generally bigger with more intricate details on them.

With a variety of themes and scenes from real life, PLAYMOBIL® allows children to use their imagination and create situations to understand different perspectives, express emotions, communicate thoughts and more, in a controlled or safe environment. An International Brand for Millions

With 3 billion figures produced worldwide, PLAYMOBIL® is an internationally beloved, award-winning toy brand that transcends all cultural and language boundaries, truly representing the diverse world we live in today. More than 5,700 different figures have been created over the past 45 years. If the figures were laid head to toe, they would stretch 3.7 times around the Earth! Created based on our culture and the everyday lives of millions around the world. The only story worth living is the one you write!

“The secret of PLAYMOBIL® lies in the stories created in a child’s head” - Horst Brandstätter, Former owner of Brandstätter Group

What are you looking for?